Do You Have a Cue for That? 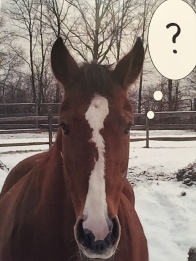 Last week I posted a video on my facebook page of Aurora learning the difference between targeting and manipulating an object, and it reminded me of something that I’ve been meaning to write about for a while. This is the importance of making sure that each new behavior has its own cue, that the cue is regularly practiced, and that old behaviors don’t lose their cues when new behaviors are taught. This may sound like another way of saying that every behavior needs its own unique cue, and it is, but I wrote it this way because it highlights some of the scenarios where a trainer with good intentions can end up with a cueing problem.

I titled this article “Do you have a cue for that?” because that’s the question I often end up asking people when they come to me with certain types of training problems. Here are a few scenarios where you might think you had a cue, but it turns out you didn’t. Or maybe you had one, but you “lost” it along the way. Or maybe you thought you didn’t need to add one, but later realized that having a more specific cue would be useful.

SCENARIO ONE:  It seemed like the horse knew the behavior (and had it on cue), but she was really relying on a set of context cues and the cue doesn’t work in other situations.

This can easily happen if you tend to work on a behavior in the same location or under similar conditions most of the time. Sometimes it just doesn’t occur to me that I might want to add a final cue to the behavior and try it in new locations, because the horse is so reliable about doing the behavior as part of its normal routine. To avoid having this happen, I like to ask for behaviors in different locations and make sure that I have an active cue that tells the horse what I want her to do. This is sometimes referred to as part of generalizing a behavior or making it fluent. Here are some examples of behaviors where it is easy to forget to add a cue and generalize the behavior:

SCENARIO TWO:  I taught the behavior and put it on cue, but I find I use the cue less and less because my horse anticipates and starts using other information (context cues) instead of waiting for the cue.

This is not necessarily a bad thing and happens quite easily if I tend to ask for the same behaviors under the same conditions. The reason I listed it here is that cues get “rusty” if the horse doesn’t get to practice responding to them. So if I find I am not using my cues because the horse is doing the behavior before I use my intended cue, then I will want to find other times to practice that cue. Here’s an example:

Once a horse has learned several behaviors, it’s not unusual to teach a new behavior by starting with an existing behavior and shaping it into something new. Being able to start with an existing behavior is one of the fun parts of clicker training because I can sometimes train new behaviors very quickly if I don’t have to start from scratch. Kay Laurence has a nice image of looking at an animal’s repertoire of behaviors or shaping history as a tree with many branches. You start by training several basic behaviors (these are the trunk and main branches).  You can add new behaviors by building on the first ones, and these new behaviors are all the branches that come off the trunk and main branches. It’s a nice image that shows the relationship between different behaviors.

I have taught my horse to walk quietly next to me when I walk around in the ring. The behavior I shaped has the horse in a relaxed frame with his head and neck level with his withers. Over a period of time this has become the default behavior for walking with me in the ring and I don’t actively cue it. The horse just offers it if I go up to the ring and walk around. Now I decide to shape the horse to walk next to me with his neck lower, so that he learns to stretch down in the walk. Over time he starts to offer this behavior more and more until I have shaped a nice walk with a lowered head and neck. This is my new behavior.

At this point I need to add a cue to the new behavior because otherwise this walk will become the new “default” behavior for walking with me in the ring. But this is not enough. I also need to make sure that the original walk has an active cue (and is not just the default). Otherwise I have no way to communicate to my horse which walk I want. This can end up being very frustrating for both horse and trainer because there will be situations in which he offers the new walk when I don’t want it and I would like to be able to cue the original walk. It’s not enough to rely on context cues once I have several behaviors that could be the “right answer” under the same conditions.

SCENARIO FOUR:  I have a behavior that I often look for as a component of other behaviors, but not alone, so I have never added a cue that allows me to ask for it separately.

This is more likely to happen with behaviors that are added criteria, and not the main focus of my shaping.   If a behavior occurs on a regular enough basis (due to natural variations), I can select for it during the shaping process by clicking for those moments when the horse happens to be doing it.  This works for the most part, but I find the horse often has less awareness of what is being clicked and it does put me in an awkward position if I find myself withholding the click because that criteria is missing.  I find that a good rule of thumb is that if I want the same behavior as a component of several other behaviors, it’s a good idea to also train it separately and give it its own cue.

Most of these scenarios are ones that could be resolved in different ways (you don’t HAVE to do it by adding a cue), but they are presented as examples of times when it would be really handy to have a cue and you might find yourself saying “Wow, I wish I had a cue for that!”